What Has The Metronome Done To Us? 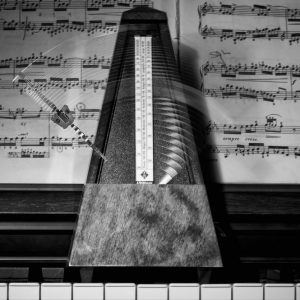 As we all know, playing “in time” for a drummer is crucial, but playing “in the pocket” is what lands you the big gig these days. For those unfamiliar with the phrase “playing in the pocket”, Steve Gadd calls it an agreement between the drummer and the people you’re playing with, or between the drummer and a click track or drum machine. He continues by saying that there isn’t an actual definition for pocket or groove, except that when you’re “locked in” everything FEELS good.

Exactly those last 3 words (Everything FEELS good) made me want to investigate more on how throughout the course of history, music has changed in terms of “feeling”.

One tool that certainly had a huge impact in how we feel music today is the METRONOME.

Invented at the beginning of the 19th Century, the Metronome has served as a tool to help musicians staying in time and help them develop a sense of timing. Throughout the years this tool has become one the most valuable and used devices in the industry.

Although the Metronome was being used for tempo reference and for practice in classical music (apparently Beethoven was one of the first composers to include a BPM marking on his music), at the beginning of the 20th Century the Metronome still didn’t find its place. New genres were arising, Swing, Bebop, R&B, Rock’n’Roll and many others, but it wasn’t until the advent of film scoring that finally click tracks started to be used. In fact, to avoid using a conductor watching the movie on the big screen, film studios were probably the firsts to start using click tracks while recording bands or orchestras.

By the early 70’s, thanks to the invention of drum machines and the whole digital revolution, the metronome was suddenly seen as an important asset for musicians to help their timing being 100% accurate while recording. This event was about to change people’s perception on timing forever and actually even the way we hear music today.

For example, have a listen to the famous Stevie Wonder tune “Superstition” live in the early 70’s

and a more recent version

Of course some of the musicians are different and even though their playing is amazing on both versions, we can’t deny that the actual FEEL of the song is not the same, right?

I hear a lot more tightness and precision in the recent version compared to the old one. At the same time the 70’s version is great because it’s got that real LIVE jammy feel to it.

So my final question to you is this one:  now that there is more precision and less “sloppiness” in the recordings we hear these days do you think that it makes the music FEEL better?

VLOG #1 – How To Record ROCK Drums – with Henrik Fossum

VLOG #1 – How To Record ROCK Drums – with Henrik Fossum